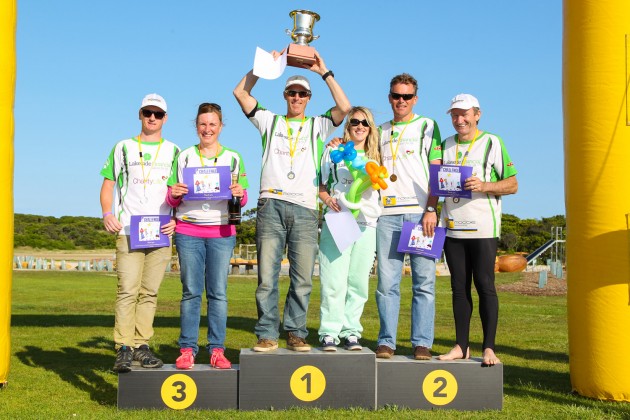 After successful events in QLD and NSW, the Great Adventure Challenge moved to the seaside town of Anglesea for the Victorian leg of the series. Situated along the scenic Great Ocean Road with spectacular surf beaches and coastal forests, the backdrop was set for another action packed challenge.

As the inaugural event in Victoria, most teams were unfamiliar with the style and format of the race but many hours of training and mental preparation saw ten highly motivated teams line up for the start.

From the start, teams were presented with a number of challenges, the first wading up a creek and a river crossing to reach the kayak TA. This was followed by a kayak leg, a team building activity and a run along the beautiful surf coast walk offering spectacular views of Bass Strait.

The first of two mountain bike legs however proved the undoing of some teams who struggled to navigate the numerous tracks and trails of the Great Otway National Park. With some significant time gaps opening up, only three legs remained with the ‘team obstacle course’ generating the most laughs (and a few bruises).

Although serious racing forms part of the Great Adventure Challenge, the real focus was on the fundraising undertaken by the many dedicated teams in support of the Starlight Children’s Foundation. The Victorian event raised a staggering $127,000 in its first year lead by top fundraisers Melbourne Convention Bureau and Team Bulla.

The Victorian contribution brought the total funds raised across the 2013 series to $484,000. On behalf of Maximum Adventure and the Starlight Children’s Foundation, we would like to thank 50 teams who participated in the series and worked tirelessly to raise much needed funds to brighten the lives of seriously ill and hospitalised children, and their families.

The series will be back in 2014 with events in NSW, QLD and Vic. If you are interested in entering a corporate team, check out the website for more information.